It is with sorrow we chronicle the death of Grandpa Bjork which occurred Monday April 7th at 12:30 p.m. Andrew O. Bjork was born in Norway in June 1828 and emigrated to this country in 1861, settled first in Dane Co. Wis. where he resided four years, then moving west in 1865 and settle in Otranto twp Mitchell Co Iowa where he has always lived till the time of death. He leaves 7 children: 4 sons and 3 daughters and 11 grandchildren to mourn his loss. The funeral took place Thursday afternoon at 2 o'clock in Mona. His daughter Mrs. Peter Dock of Hawley, Minn and Mrs. Frank Willey of Milwaukee, Wis. came to attend the funeral. 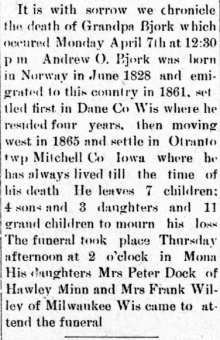