Alfred J. Larson, son of John and Martha (Samuelson) Larson, was born November 19, 1885 at Mona. He was baptized and confirmed in the Lutheran faith in Mona by the Rev. J. Muller Eggen and also attended the Mona school.

On March 1, 1924 he was united in marriage to Irene Dock at the Lutheran parsonage by Rev. C.S. Vang. To this union two sons were born.

He was employed in the Lyle Culvert Co. in Lyle and also for the same Co. when they moved to Minneapolis for several years then returned to Mona and was employed for the Illinois Central Railroad until his retirement in 1952.

He suffered a stroke October 14, 1963 from which he never recovered. He had been a patient at Mitchell Memorial hospital in Osage and the Austin Retirement Home.

He is survived by his wife, one son, Idore of Austin; five grandchildren; two sisters, Mrs. Mina Nelson of Mona and Mrs. Newton Bigelow of Austin; and several nieces and nephews.

He was preceded in death by his parents, a son Joy William in 1952 and three brothers and two sisters. 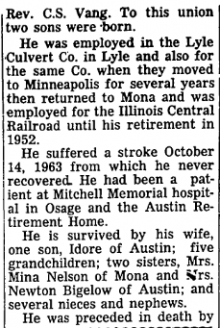 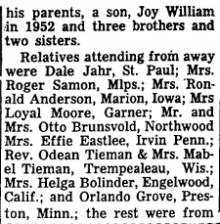