Alexander D. Reynolds died at his home in Lyle township north of London Sunday night about 10 o'clock after a week's illness of pneumonia. Though in feeble health for some time he was able to attend the funeral of his sister-in-law, Mrs. Perry Reynolds some two weeks ago.

Mr. Reynolds was born in Argyle, May 1, 1851, but for the past 34 years has lived in Mower county. He leaves beside his wife two brothers and two sisters, Mrs. Ada Drummond and Mrs. Marie Watkins.

The funeral was held Wednesday afternoon at 1:30 from his home in Lyle Township with interment at Cedar City. 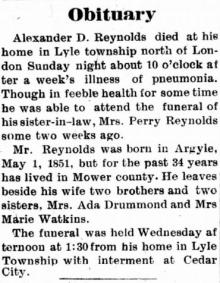