A message reached Lyle relatives Sunday that Oscar Theodore Thovsen, who went to Kalispell, Mont., a little over a year ago, accompanied by his brother Edwin, had passed away and that the remains would be sent here for burial.

The deceased was born on the old homestead farm about 5 miles north east of Lyle April 3rd, 1885 and lived here until March 1916. He leaves a mother, three brothers Henry and Albert Thovson of this locality and Edwin of Kalispell, also a sister, Mrs. Emily Thon, of Minot, N. D.

Later- Another telegram arrived Thursday morning stating that Edwin Thovson is dead and the remains would be shipped to Lyle. 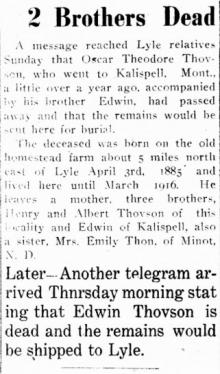