Austin, Minn.
A 14-year-old boy was convicted Monday in the killing of Sharon Turnbull, the Lyle, Minn., school teacher who was shot to death as she sat in her living room watching television.

Olmsted County Judge Harold Krieger, who decided the matter without a jury, said the Lyle boy's confession was the most significant piece of evidence in the case.

Technically the boy was found delinquent by reason of having committed first-degree murder. Under juvenile court rules, his penalty, to be issued Feb. 28, can be no more severe than placement in a detention center until he turns 19.

The boy has been informed of the decision before it was announced in court, said his lawyer, Bruce Hanley. The youth sat motionless as it was repeated to him.

During a seven-day hearing in Mower County last December, Krieger was told that another youth had confessed to the killing. Yesterday, the judge said that surprised him, but it didn't persuade him.

He said the defendant's confession was significant because it was repeated to several officials and remained consistent. "There were enough elements in the confession to tie him to the crime," he added during a press conference.

Authorities didn't believe the other youth because no evidence corroborated his story. The defendant offered no details in his confession, saying he had blacked out. But investigators found the murder weapon, a .22 caliber rifle, in his house.

Krieger wrote: "The evidence shows beyond a reasonable doubt that on

Lyle continued on page 5A

Lyle Continued from page 1A

the morning of Aug. 6, 1982, at approximately 12:29 a.m., (the defendant) removed his .22 caliber rifle from a gun case, went.. to the house of Sharon Turnbull, stood on the steps of her front porch, aimed the rifle at Sharon Turnbull's head as she was sitting on her living room floor, shot Sharon Turnbull in the head with premeditation and intent to kill, and caused her death."

He added: "The fact that (the defendant) may have "blacked out" or does not remember the details of the shooting does not alter the conclusion that the act was committed with premeditation."

Defense attorney Hanley, of Minneapolis, had suggested that Krueger investigate the possibility that the youth had committed second- or third-degree murder. But Krieger said the evidence indicated that the act was premeditated.

"In Minnesota law you don't need a lot of preparation for an act (to determine premeditation)," Krueger said. "All you need is the loading of a gun or going to the house."

Hanley said he would appeal. "I believe a finding of first-degree murder was based on circumstantial evidence of a bullet hole in the screen," he said. "Everybody dismissed the confession of the other youth, and I'm not sure why. (The defendant) said nothing about the manner in which he could have done it."

Hanley had tried to prove during the December hearing that the first youth to confess had had a motive for killing the 33-year-old teacher- anger because of Turnbull's relationship with his mother. One witness said Turnbull was at the boy's home "continuously."

Mower County Sheriff Wayne Goodnature said the verdict proved that investigators had handled the case properly. But he criticized the juvenile court process, "I don't think that anyone, under any conditions, should be able to commit first-degree murder in this state and ever see the light of day." he said. "That's my own personal opinion."

Krieger said that in determining a penalty for the youth, he will consider the gravity of the crime, the defendant's social history and his receptiveness to treatment. 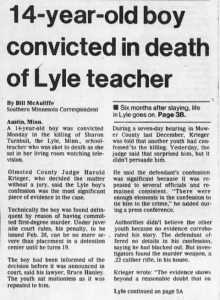 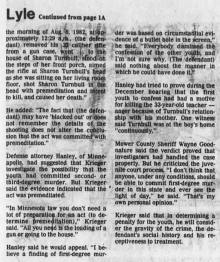